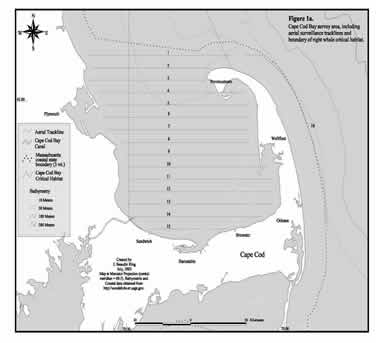 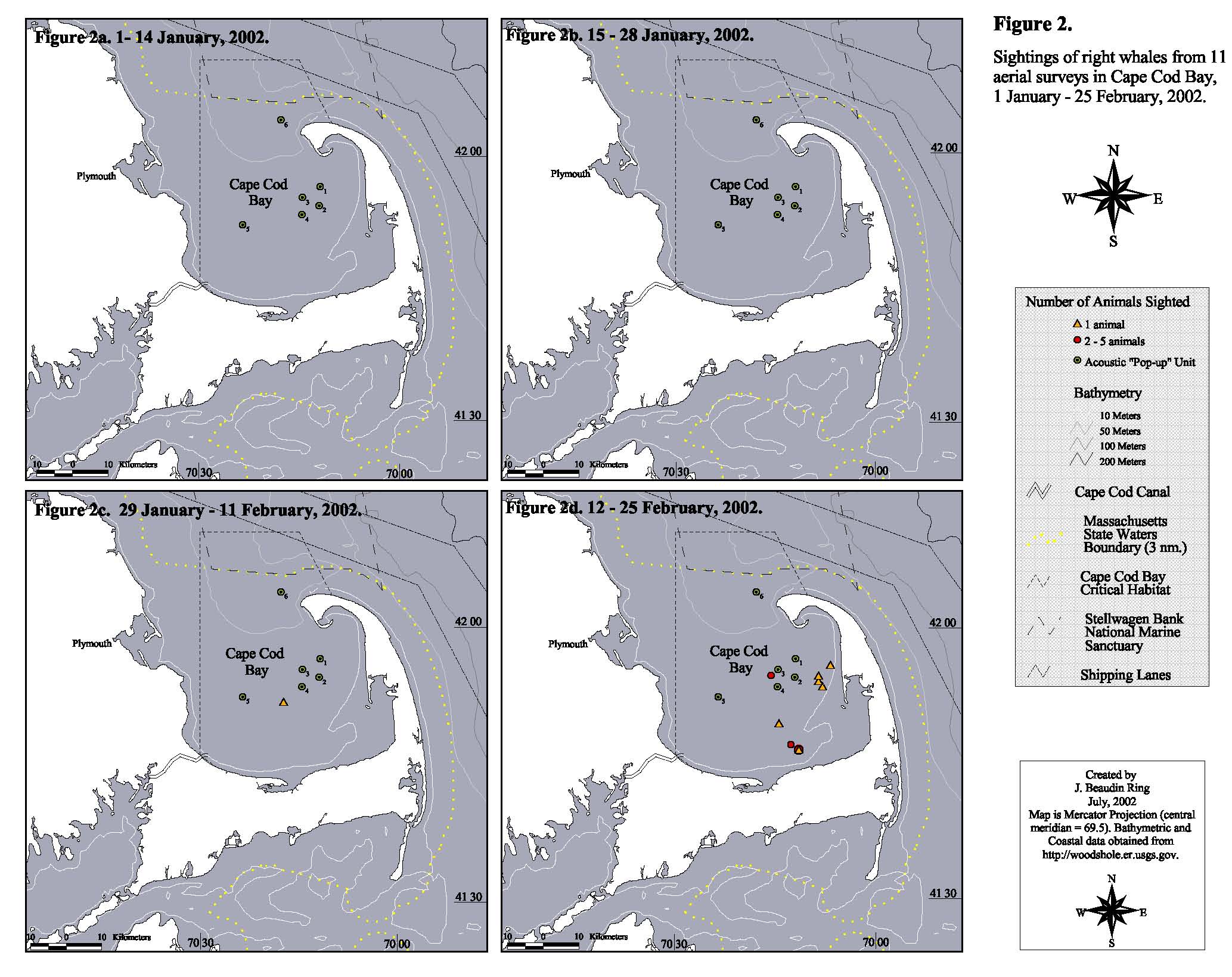 Photographic Methods
i) Identification Photographs:
During aerial and shipboard surveys, photographs were taken on Kodak Kodachrome 200ASA color slide film, using hand-held 35-mm cameras equipped with 300-mm telephoto lenses and motor drives. From the air, photographers attempted to obtain good perpendicular photographs of the entire rostral callosity pattern and back of every right whale encountered as well as any other scars or markings. From the boat, photographers attempted to collect good oblique photographs of both sides of the head and chin, the body and the flukes. The data recorder on both platforms was responsible for keeping a written record of the roll and frame numbers shot by each photographer in the daily log.

ii) Photo-analysis and Matching:
Photographs of right whale callosity patterns are used as a basis for identification and cataloging of individuals, following methods developed by Payne et al (1983) and Kraus et al (1986). The cataloging of individually identified animals is based on using high quality photographs of distinctive callosity patterns (raised patches of roughened skin on the top and sides of the head), ventral pigmentation, lip ridges, and scars (Kraus et al 1986). New England Aquarium (NEAq) has curated the catalogue since 1980 and to the best of their knowledge, all photographs of right whales taken in the North Atlantic since 1935 have been included in NEAq's files. This catalogue allows scientists to enumerate the population, and, from resightings of known individuals, to monitor the animals' reproductive status, births, deaths, scarring, distribution and migrations. Since 1980, a total of 26,275 sightings of 436 individual right whales have been archived, of which 327 are thought to be alive, as of December 2001 (A. Knowlton, NEAq, pers. comm.)

The matching process consists of separating photographs of right whales into individuals and inter-matching between days within the season. To match different sightings of the same whale, composite drawings and photographs of the callosity patterns of individual right whales are compared to a limited subset of the catalogue that includes animals with a similar appearance. For whales that look alike in the first sort, the original photographs of all probable matches are examined for callosity similarities and supplementary features, including scars, pigmentation, lip crenulations, and morphometric ratios. A match between different sightings is considered positive when the callosity pattern and at least one other feature can be independently matched by at least two experienced researchers (Kraus et al 1986). Exceptions to this multiple identifying feature requirement include whales that have unusual callosity patterns, large scars or birthmarks, or deformities so unique that matches from clear photographs can be based on only one feature. Preliminary photo-analysis and inter-matching was carried out at CCS, with matches confirmed using original photographs cataloged and archived at NEAq.

iii) Photographic Data Archiving
Upon completion of the matching process, all original slides were returned to CCS and incorporated into the CCS catalogue of identified right whales to update existing files, using the same numbering system as NEAq, in archival quality slide sheets. NEAq archives copies of photographs representing each sighting. Copies of photographs of individuals that are better than existing records, and photographs of newly identified whales, will be included in the NEAq master files as "type specimens" for future reference. The master files are maintained in fireproof safes at NEAq. All catalogue files are available for inspection and on-site use by contributors and collaborators.

The Northeast Consortium encourages and funds cooperative research and monitoring projects in the Gulf of Maine and Georges Bank that have effective, equal partnerships among fishermen, scientists, educators, and marine resource managers.

The Northeast Consortium seeks to fund projects that will be conducted in a responsible manner. Cooperative research projects are designed to minimize any negative impacts to ecosystems or marine organisms, and be consistent with accepted ethical research practices, including the use of animals and human subjects in research, scrutiny of research protocols by an institutional board of review, etc.

The Northeast Consortium encourages and funds
cooperative research and monitoring projects in the Gulf of Maine and Georges Bank that have effective,
equal partnerships among fishermen, scientists, educators, and marine resource managers.

At the 2008 Maine Fisheremen's Forum, the Northeast Consortium organized a session on data collection and availability. Participants included several key organizations in the Gulf of Maine area, sharing what data are out there and how you can find them.

The Northeast Consortium has joined the Gulf of Maine Ocean Data Partnership. The purpose of the GoMODP is to promote and coordinate the sharing, linking, electronic dissemination, and use of data on the Gulf of Maine region.

The Northeast Consortium was created in 1999 to encourage and fund effective, equal partnerships among commercial fishermen, scientists, and other stakeholders to engage in cooperative research and monitoring projects in the Gulf of Maine and Georges Bank. The Northeast Consortium consists of four research institutions (University of New Hampshire, University of Maine, Massachusetts Institute of Technology, and Woods Hole Oceanographic Institution), which are working together to foster this initiative.

The Northeast Consortium administers nearly $5M annually from the National Oceanic and Atmospheric Administration for cooperative research on a broad range of topics including gear selectivity, fish habitat, stock assessments, and socioeconomics. The funding is appropriated to the National Marine Fisheries Service and administered by the University of New Hampshire on behalf of the Northeast Consortium. Funds are distributed through an annual open competition, which is announced via a Request for Proposals (RFP). All projects must involve partnership between commercial fishermen and scientists.

The Northeast Consortium seeks to fund projects that will be conducted in a responsible manner. Cooperative research projects should be designed to minimize any negative impacts to ecosystems or marine organisms, and be consistent with accepted ethical research practices, including the use of animals and human subjects in research, scrutiny of research protocols by an institutional board of review, etc.