Website: https://www.bco-dmo.org/dataset/3734
Version: 24 September 2012
Version Date: 2012-09-24
Project
» Zooplankton feeding at the base of the particle maximum: Gatekeepers of the Vertical Flux? (GATEKEEPERS)

Zooplankton feeding at the base of the particle maximum: Gatekeepers of the Vertical Flux? (GATEKEEPERS)

Zooplankton feeding at the base of the particle maximum: Gatekeepers of the Vertical Flux?

A range of observations suggest that zooplankton act as gatekeepers for material leaving the euphotic zone. This study will investigate the interactions of zooplankton with other particles using a suite of autonomous and tethered instruments in conjunction with finescale water sampling. The SOLOPC (Sounding Oceanographic Observer with Laser Optical Plankton Counter) will be the autonomous instrument and provide hourly profiles of zooplankton and other particles. Previous sampling with the SOLOPC indicated a diel cycle of production and abundance of particles in the euphotic zone and their sinking and consumption, presumably by zooplankton observed at the base of the particle abundance maximum. The SOLOPC senses particles, including zooplankton and aggregates, and measures their equivalent spherical diameters which can be used to compute particle size spectra. However, it is difficult to use the SOLOPC to distinguish among particle types, such as copepods, larvaceans, and aggregates, particularly if they are small. The research will include an intensive field study that will take place in Monterey Bay and use adaptive sampling to observe near SOLOPCs with a new, AUV-borne imaging system, ship-based CTD and MOCNESS sampling, and MBARI's ROV Ventana. The investigators will alter a SOLOPC to be stationary relative to an isopycnal and use the particle counts that it accumulates to calculate a flux spectrum. They will combine the flux and concentration spectra to estimate particle sinking velocities as a function of particle diameter. Zooplankton feeding in the water column will be estimated by analyzing the gut fluorescence of animals caught in zooplankton nets and by counting the distribution of fecal pellets in water samples. Results will enhance the understanding of the role of the zooplankton as gatekeepers in the vertical flux of particles and, hence, the biological pump. The study will also provide new insight into factors that affect zooplankton behavior and ecology.

Collaborating institutions include SIO, TAMU, LUMCON, MBARI, BIO, and Université Paris VI. The SOLOPC, modified to measure flux as well as profile, and REFLICS are intended for acquisition and use by other researchers worldwide. The understanding we gain of role of the zooplankton as gatekeepers of the vertical flux will contribute valuably to understanding of the biological pump and the carbon cycle.

PUBLICATIONS PRODUCED AS A RESULT OF THIS RESEARCH
Jackson, GA and DM Checkley Jr. "Particle size distributions in the upper 100 m water column and their implications for animal feeding in the plankton," Deep-Sea Research, 2011. 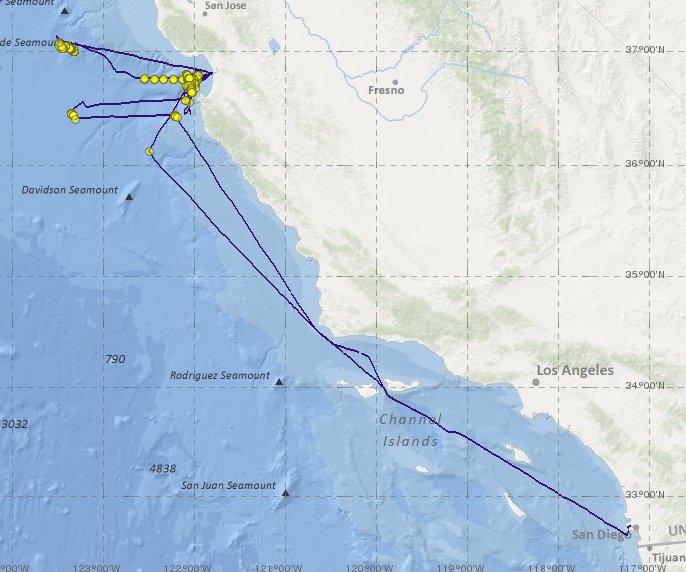